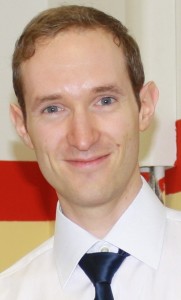 BHD researcher interview: Dr Davide Bondavalli is an Honorary Research Associate at the Cancer Council of Victoria, Melbourne Australia, and a member of the steering committee for the International Consortium for the Investigation of Renal Malignancies (I-ConFIRM). He has just completed his medical training, specialising in medical genetics and performed his dissertation research on Birt-Hogg-Dubé syndrome.

During my training in Medical Genetics, I spent the last 7 months of my specialization in Australia at the Royal Melbourne Hospital and at the Cancer Council of Victoria. Here, I worked with Prof Winship and Dr Bruinsma, who introduced me to the genetic aspects of kidney cancers. I-ConFIRM (the International Consortium For the Investigation of Renal Malignancies) is going to undertake a research project on Birt-Hogg-Dubé syndrome and was just approved by the Human Research Ethics Committee of the Cancer Council of Victoria. Prof Severi and Prof Maher, I-ConFIRM members, asked me if I wanted to get involved and… guess what I answered?

3. What would help current research?

In our research, at the moment, we are waiting to hear from some authors involved into this project. Collaboration is mandatory, especially for rare diseases, since information, such that that led us to undertake this project, is much more accurate the larger the numbers. It requires a great effort, but at the end we will rely on the largest BHD case series and we hope that our results will be useful for the better management of BHD patients.

In general, I think that funds are the bottle-neck for research.

Next Generation Sequencing is the incoming future in all clinical practices, but today interpretation of results cannot keep the pace of the huge amount of data produced. Moreover, “incidental findings” risk can be more harmful than useful for patients. For this reason, prudence and common sense are necessary.

“Von Hippel-Lindau disease: a genetic study”, J Med Genet 1991. In this article, E.R. Maher et al. performed a similar research to our BHD project but on VHL syndrome. I hope that the results of the BHD project I am currently working on, once published, will be as useful as the ones of this article are for me and for all geneticists and expand current scientific knowledge.

At the moment, my first short term goal is finding employment in a oncogenetic department in which I can apply my knowledge and skill to help patients and their families. Even though medical genetics is the future, and individuals who know what our job consists of can understand the importance of genetics, finding a job is unfortunately really hard but I still keep being confident. Another short term goal is to finish this project on BHD syndrome and, if possible, work again on other projects on kidney cancers with the I-ConFIRM group, a high level team I have proudly collaborated with.

I cannot see so far in the future and every forecast risk to be under-estimated. In fact, after the discovery of Watson and Crick, none would ever bet one pound that not so many years after, in 2014, we would be able to do and know as much as we can today. I hope that science will progress and be able to provide new solutions, but only if we will trust and invest on it.

8. What is your favourite book /  film/ music

Book: And Then There Were None.

Film: The Lord of the Rings.

A doctor or a researcher… I think I fulfilled my dreams !

Working in a wonderful team of geneticists and genetic counsellors to serve patients, involved at the same time in research project.

11. What’s the best advice you’ve ever been given?

BHD personal story: Tim is from the US and was diagnosed in 2012.

1. When did you first get diagnosed?

White bumps on my face, mostly nose.  I inquired with the local VA hospital’s dermatological department, an intern remembered BHD and did a biopsy.

I linked medical difficulties my father and grandfather had to the disorder, became worried about my kids, and began to treat my body better to minimize chances of setting off tumors.

Yes, to my immediate family and close relatives.  My parents were tested to confirm that it had passed through my father as suspected (there is a reported case in his small home town in Scotland, so I thought it very likely) and my son was confirmed negative.

Travel and recreation plans are sometimes shaped by the fear of pneumothorax, diet changed a bit, and some family still has not tested for it, so do not know if they have it or have passed or will pass it on.

Don’t be discouraged by how many physicians will not have heard of BHD.  That was a little scary at times.  Go ahead and eat the expense of the genetic testing, it’s best to know for sure.

8. Has BHD affected you as a parent?

If I were still having children I would have a lot more to think about.  I told my children, but they are in their late teens.  My son, then 17, chose to be tested so he could participate in research if possible (he was negative.)  My then-14 daughter chose to wait for testing, as advised by genetic doctors, I believe she would rather not think about the possibility for now.  I definitely would have weighed the risk of passing on the mutation if I were now starting a family.

9. Do you have any tips and advice for caregivers?

I am asymptomatic as of yet, other than the benign facial bumps and lung cysts.

Visually, just the facial bumps.  I have no kidney involvement.  I have lung cysts but have yet to experience a pneumothorax.

Once BHD was suspected, I was referred to a geneticist at the UCSF Rare Cancers Clinic.

13. What has been your experience of your healthcare system and healthcare professionals?

I’ve had stellar treatment, getting advisal from UCSF Rare Cancer, and my tests from the VA.

14. Has BHD had any health insurance implications for you?

Not as of yet, other than the genetic testing, which I don’t believe was covered.

I will continue to take care of myself, will monitor research, and will keep all my medical help informed.  I would like to start attending the symposiums.

Don’t fear the worst.  There are some really bad cases out there and they are frightening, and a lot of the vocal BHD community are people who have already had a lot of kidney problems and series of lung collapses.  Some of us haven’t.  Take strength and advice from the hardest hit amongst our community, but don’t assume or fear the worst.  Prepare, and get informed.