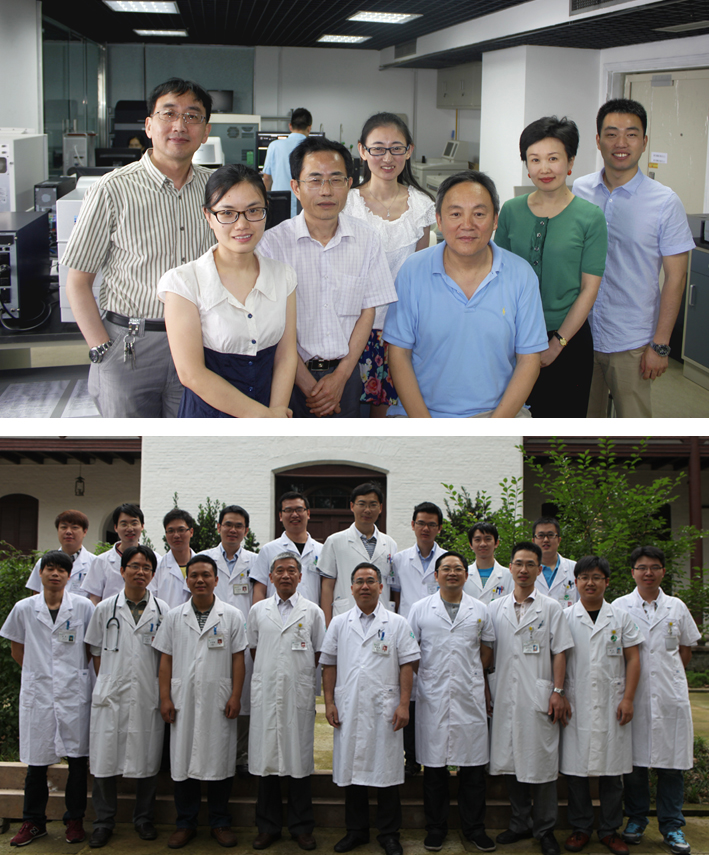 BHD Researcher Interview: Long Yi is a clinician and researcher at the Nanjing University Medical School. Long is part of the Long Yi is part of the BHD Workgroup in China. Their research focuses on increasing the understanding of the role FLCN mutations play in sporadic pneumothoraces and increasing BHD diagnoses in China.

About eight years ago, we conducted a FLCN gene mutational analysis in a group of patients diagnosed with primary spontaneous pneumothorax (PSP). 10% patients had a FLCN mutation, although some of them did not have the full spectrum of BHDS manifestations. This result encouraged us to identify BHDS among PSP populations.

We are interested in genotype-phenotype correlations in a large-scale PSP population from several hospitals in southeast China, including Taizhou Hospital of Zhejiang Province, Nanjing Chest Hospital,  Drum Tower Hospital (affiliated to Nanjing University Medical School) and Hangzhou First People’s Hospital. The project, funded by National Natural Science Foundation of China, will address the following issues: Frequency of FLCN mutations in hospitalised PSP patients; Do patients with a positive family history have a FLCN mutation? What percentage of PSP patients with bilateral basally located lung cysts have BHDS if the finding is an index of suspicious BHDS? In addition, we are investigating if there are any other genes mutated in families diagnosed with PSP.

There are two recent studies we are interested in. One is the research of “Prevalence of Birt-Hogg-Dubé syndrome in patients with apparently primary spontaneous pneumothorax” reported by Johannesma et al. (2014); they found that cysts in the basal parts of the patient’s lung could be an important indicator of BHD syndrome, but only in a relative small cohort. This characterization of pulmonary cysts needs to be validated in a larger population for clinical diagnosis. The other is the study on the function of FLCN gene in lung development. The results of Goncharova et al. (2014) show that FLCN deletion in lung epithelium leads to cell apoptosis, alveolar enlargement and impaired lung function. The animal model used in this research expressed a pulmonary phenotype similar to emphysema but partly different from the lung cysts of BHD syndrome, potentially due to difficulties in mimicking lung air pressure between mice and human. A more suitable animal model is needed for research on the development of cysts in BHD syndrome.

We learn from every paper on BHD, including basic research and clinical reports.

We have realized that the optimum programme for diagnosis, management and surveillance of BHD patients and their family members has not yet been established. Our research will promote the development of this field in China.

We think researchers will uncover the mechanisms underlying how FLCN mutations cause BHD syndrome and seek potential therapeutic targets.

8. What is your favourite book /  film/ music

The film, Shawshank Redemption is my favourite one. We need courage to challenge ourselves.

Be an explorer of the world to find what nobody else knows, such as pirate treasure or aliens.

Being a pioneer in the field of personalized medicine in China.

11. What’s the best advice you’ve ever been given?

“Do what you want to do”

Frederick Sanger, a British biochemist who has made great contributions to both nucleic acid and protein sequencing. His fundamental studies still have a marked impact on present genomic research and will influence future research.

BHD Personal Story: Jan is from the USA and was diagnosed with BHD in 2013.

My son was diagnosed in the fall of 2013.  A dermatologist spotted his face bumps, did a biopsy and results indicated BHDS. She directed us to get him genetically tested at the University of Washington in Seattle.  His diagnosis prompted the geneticist to recommend that we determine the contributing parent.  Since my husband had renal cancers in the family, he was tested first.  However, he was negative and everyone turned to look at me.  My diagnosis came in December 2013.  An MRI scan determined that I had many kidney cysts, but only one looked solid and worth following.  The follow-up CT indicated that the tumor had grown and a partial nephrectomy was in order.  The surgery was postponed until September 2014.  The surgery was successful and all margins were clear.  After posting about my diagnosis on the BHD Facebook page, I was encouraged to contact the National Institute of Health.  That led me to Bethesda last May where I met with Dr. Marshall Linehan, who is currently researching BHDS.  I have been welcomed into their study as my renal cancer was an unusual type and I had a previous Large B Cell Lymphoma.

I had no symptoms.  I was lucky to have had the testing (based on my son’s diagnosis), which in turn, located the cancer. Since it was determined to be an aggressive Papillary Type II, I am very grateful to my son’s dermatologist.

To tell the truth, I was more concerned for my children and grandchild than I was for myself.  But then, I’ve had diabetes for 45 years and in the last 10 years both diffuse large B cell non-Hodgkin lymphoma, breast cancer and now renal cancer.  Not much fazes me anymore.  It is what it is and I’ll always make the best of it.

I have.  Both siblings are currently dealing with other health problems and they have not chosen to be tested at this time.  My mother is 90 and we don’t see the need for her to be tested. Both children (40 & 37) have BHD and my grandson will be tested when he is 18.

At this point, my son is annoyed by the massive tag moles, but the bumps just make him look rugged!  My daughter has some cyst in her kidneys.  None of us have had any pneumothorax issues.  Only my son has the face bumps.

The internet, the BHD Facebook Page, the National Institute of Health and the Genetics Department at the University of Washington, Seattle.

Get to your local university’s Genetics Department.  It might take a referral.  Be pro-active.  Follow through.  Be persistent.  BHD is only 20 years old.  Most doctors are not aware of this condition.  Find the medical people who know about BHD and educate the rest!

I am concerned for them, but in the end, I can’t change their genetics.  I continue to urge them to complete their follow-up appointments and remain a positive “guide on the side.”

Breathe. Stay positive. Be patient. Smile and say I LOVE YOU!

10. What are your current symptoms?
None.  My NIH CT scan indicated multiple cysts in my kidneys, but none of a remarkable size.  No lung blebs or face bumps.

Just the partial nephrectomy in September 2014 and follow up scans.  At this time NIH will see me once a year for an annual evaluation.

Since I had the genetic testing at the University of Washington, they recommended a urology oncologist at the Medical Center there.  He was very knowledgeable about BHDS and I felt very comfortable that he knew what he was talking about. He is very accessible via email to answer questions that come up.  Since I am now in the NIH study, he offered his services to my son.

Well…. As you can see, I’ve spent a lot of time in the healthcare system.  I am 67 with Medicare and private insurance.  Financially, medical treatment is covered except for co-pays.  The physicians, surgeons, and researchers are fantastic.  But…. I am incredibly proactive and I’m not afraid to find the best people! Ask questions and listen closely.  I believe it is critical to our health to become an expert in our condition.  “I’ll be the best BHDS patient!”  “I’ll be the best Diabetic!” “I’ll be the best cancer survivor!”

14. Has BHD has any health insurance implications for you?

None.  In the US, you cannot be turned away if you have a pre-existing condition – according to the Affordable Health Care Act.

At this time, I hope my participation in the BHDS study at NIH will be helpful.  They determined my cancer was clear cell, not papillary type II.  Also, they are interested in my lymphoma and its relationship to their study.  However, I would like to ensure my children and grandson will have all the treatments they need in the future.  I’ve been told that people with BHDS often have a longer life.  I plan to live mine as best I can.

Breathe…  Be diligent to get the best care available.  It is not a death sentence.  Be grateful for every morning!  Be an advocate for yourself.