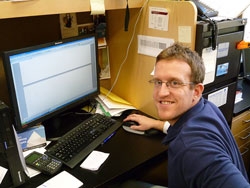 When I joined Lisa Henske’s lab back in September of 2008 and we discussed the project and BHD field as a whole.

I see two hurdles in the field: 1) A lack of commercially available antibodies for FLCN that work for immunocytochemistry and immunohistochemistry; and 2) Genetic mouse models that more closely recapitulate the disease are needed.

I have been most intrigued in the research that is being done to determine the crystal structure of FLCN.

In the BHD field, I really enjoyed the drug screening paper by Lu and Maher (Mol Cancer Ther, 2011) as my main interests are in drug discovery and development.

My short term goals are to publish our manuscript regarding FLCN’s role in cell adhesion and RhoA signalling.  In the long term, I would like to have my own lab focused on drug discovery and drug development.

I believe in the next ten years the BHD field will have a huge influx of papers that define the molecular mechanisms of FLCN’s function.  I feel with all the data that is currently being generated, things are progressing rapidly.

Favorite Book:  The Da Vinci Code; Favorite Film: Tough one since I watch a lot of movies, but have to say “White Men Can’t Jump”.

9.  What did you want to be when you were younger?

A pilot in the U.S. Air force.

Hopefully with my own lab and travelling the world.

Everything happens for a reason.

Not one in particular…

BHD Personal Story: Drew is from the USA and was diagnosed with BHD in 2007.

It was a fluke—back in 2007, I went in to get a mole removed and my dermatologist asked about the “little white bumps” on my face and neck. Since I spent a lot of time out in the sun on the farm when I was growing up, I thought they were a result of sun damage. The dermatologist then asked if I’d ever had a collapsed lung. This was a surprising question to me! I answered that yes, I’d had my right lung collapse twice and my left lung once. He replied that I might want to have an ultrasound of my kidneys because there was reason to believe I had BHD syndrome. Wow! Sure enough, an ultrasound found a big tumour hanging off my left kidney. My entire kidney was subsequently removed. The amazing part was, this dermatologist had read up on BHD syndrome just before my appointment.

White bumps on my face and neck. I’d had collapsed lungs as well, but didn’t know they were related to BHD until my dermatologist put the symptoms together.

Shock! But then I started thinking that both my mother and her father must have been affected by BHD as well. They both suffered from collapsing lungs during their lives, and both had the bumps on their skin like I do. My grandfather died at 66 from cancer and the fear of that kind of death has haunted me since I was 12 years old.

Yes, with my wife and (adopted) daughter. Not much at all with my mom’s family however—no one else is affected by it (it stops with me, fortunately!).

Adds several layers of stress to my immediate family. My wife also has some medical conditions she’s dealing with.

Suggest the possibility to your doctor. I had no idea, nor did my regular doctor.

Our daughter is adopted so she is not likely to have BHD!

Not so far; just need the awareness.

Had my left kidney removed entirely in 2008. My right kidney has developed a small tumour now; they are watching it with MRIs every six months. I’m actually fairly healthy otherwise—I made an effort to get myself into decent shape before the 2008 surgery and have kept it up since. I’m probably in better physical shape than I have been since I was in my 20s.

Left kidney removed 2008, left lung sclerosed in 1997, chest tube on right side back in 1987. Currently monitoring tumour on remaining kidney.

I’m fortunate to have a very good pulmonologist and nephrologist!

Quite good—I’m one of the fortunate people here in the U.S. who still has good health care coverage.

14. Has BHD had any health insurance implications for you?

Not so far. But it would be devastating financially if we did not have good coverage. We are far from wealthy.

Scares me to think that my health coverage could be dropped. I also know that I will be facing more surgery to take care of the tumour on my remaining kidney.

There are lots of us out here going through the same thing…join the BHD group and let your doctor know about it too!