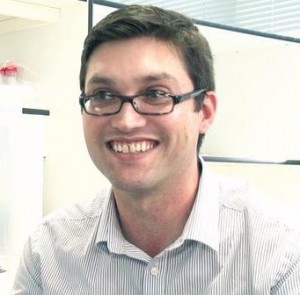 Once I found out that this rare disorder was similar to a genetic disorder I work on called Tuberous Sclerosis Complex, I was ‘hungry’ to find out more.

My laboratory is highly focused on Birt-Hogg-Dube. We are uncovering what cellular events go wrong that lead to cancer in these patients.

More people at the bench pushing the research forward.

Within the Birt-Hogg-Dube research community, I feel that there has been an active development in collaboration between research labs, which speeds up progress. Much of this is thanks to the Myrovlytis Trust who actively supports these collaborations.

I am biased, but it has to be my very first author publication as a Ph.D student that took me an exciting year of hard work to complete. It was a research paper in Oncogene that examined synthesis of protein and cell death after treatment with chemotherapeutic agents.

Short-term goals is to quickly uncover possible druggable targets that could be used as a therapy for Birt-Hogg-Dube. My long-term goal is to translate this basic science into clinical trials.

This is my prediction: Collectively with focused research, we will have the structure of the full length BHD protein (Folliculin) and a mechanism to why cancer is caused in BHD patients. The knowledge of what Birt-Hogg-Dube is will be much more wide-spread. We will also have a series of clinical trials in place for BHD patients.

9.  What did you want to be when you were younger?

A biochemist. Mainly to keep both parents happy, as my Mum and Dad were Biology and Chemistry teachers, respectively.

I am hoping that I will still be pushing out research data that is linked to clinical therapies.

You generate your own luck with hard work.

Not sure whether he would like being called a hero, but I have learnt a lot about good science from my mentor Prof. John Blenis who works at Harvard.

Would you like to learn more about Dr Andy Tee? See his video interview and read the Lab Profile on the BHD Research Blog.

BHD Personal Story: Helma shares her perspective from the Netherlands.

In November 2010, I received a letter from a geneticist, through a niece. A niece of my niece was diagnosed with BHD and this letter was addressed to all family members.  I knew that spontaneous pneumothorax was on my father’s side of the family, but we never knew about the kidney cancer. When I read some articles about BHD, what it is and what it causes, I knew my sister and I would have a good chance to be BHD positive. So, both of us went to the geneticist and dermatologist, did a DNA test, and both of us were diagnosed as BHD positive. And we had kidney screening by ultrasound and MRI.

But whereas my kidneys were clean, the one kidney of my sister contained a tumour (again!).  It was a tumour of 2.8cm, located at the inside of the kidney nearby the urine tubes and it was successfully removed in March 2011 (about 20% of the kidney was removed). But, within one week after she got home, she was acutely hospitalised with a burst aneurysm’.  She survived this heavy surgical operation.  At the moment (September 2011) she is still recovering; she still is very tired.

Concerning the fibrofolliculomas, I have only a few (located on my nose and back of my ear) while my sister has none.

I have had a spontaneous pneumothorax 3 times, the first one during my pregnancy with my twins. But then it was not diagnosed as a pneumothorax. I had some pain around my heart, but after a rest it was gone. Meanwhile I had premature contractions and therefore I was hospitalised. I had to rest all day and probably the pneumothorax was healed by rest. Three years later (at age 36), I had my second pneumothorax (right lung). I had some slight pain that did not go away, an X-ray was made, I was diagnosed with pneumothorax, I got the talc treatment and after 2 weeks in the hospital I went home.  But within one day I had to go back, because now my right lung collapsed. Again an X-ray was made etc. During the talc treatment of the right lung some adhesions were seen. The pain was more or less the same as during my pregnancy and therefore it was concluded that this lung had collapsed before. All the times it was not a complete pneumothorax but just a partial one.

More serious is the medical history of my sister. She had kidney cancer when she was 23 years old and the complete kidney was removed. And also she has had one pneumothorax (at age 29). But she had a complete collapsed lung, so the pain was much stronger.  She also had the talc treatment.

The impact was heavier then I would have expected at the start, after reading the first letter of the geneticist.

One reason is that one of our children is also BHD positive. Now you know what it can cause, what impact and illness it can give, and that there is no cure or healing.  Our daughter (age 19) will start her kidney screening at age 20.

One other reason is that I always thought that, if necessary, I could donate a kidney to my sister. But now that we both have the same illness, I do not think it is possible anymore.

And moreover and more seriously, it will pass to the next generation and it never stops. Last month I heard that another niece is diagnosed with a (small) kidney tumour and will be treated by cryoablation within two weeks.

Yes, because if you are BHD positive, which is a 50% chance [if one of your parents is positive], I think it is useful / necessary to get a kidney screening every year. Doing this you will be diagnosed on time, so if a kidney tumour develops it can be removed by kidney-sparing surgery.

At this moment most nieces and nephews (cousins) have had a DNA test. Concerning my generation, born between 1941 and 1959, 10 (or 11) people are diagnosed positive for BHD. In this group of 10 (or 11) people, 7 have had one or more pneumothorax and 3 have had a kidney tumour. So I think the percentage of the prevalence of pneumothorax in our family is higher than expected.

I do not have detailed information about the prevalence of fibrofolliculomas in our family.

As I said before, we went to the geneticist and he told us about BHD. Also the internet is very useful, especially the website of the Myrovlytis Trust.  And I also visited the BHD congress in Maastricht in May 2011 which gave me a lot of information.

Go to a university hospital. Local and regional hospitals do not know what BHD is.

8. Has it affected you as a parent? E.g. telling your children, starting a family, genetic counselling.

It was no problem telling this to our children. They knew about my medical history concerning pneumothorax. And gladly they both agreed to do a DNA test. I have two children and one is BHD positive. Next year, she will be 20 years old, and then she will start her kidney screening.

My sister has also two daughters and also one is BHD positive. She was pregnant at the time she had her DNA test. Meanwhile she gave birth to a beautiful daughter and got her kidney screening after her delivery. Her kidneys were clean.

But again, I think that for our next generation it is more difficult to cope with. We were unaware, but they know what chances they have to develop pneumothorax and kidney cancer.

9. What are your current symptoms?

At the moment I have no or little symptoms.

But, because of the talc treatment every now and then I still can feel exactly where my lungs collapsed and sometimes (rarely) this pain is very strong.  More often this pain is dormant /weak and often it is weather dependent, especially when it is cold and rainy for a longer period.

10. What treatment are you having, and have you had?

I have had the talc treatment for both lungs.

Because I received a letter from a geneticist (through a niece), I was immediately at the right place to be, where all the knowledge about BHD is.

12. What has been your experience of the healthcare system and healthcare professionals?

The geneticist was working in university hospital. Here they (also the dermatologist) knew a lot about BHD. It felt good; it was the right place to be.

But, I also visited a pulmonologist in a more local hospital (concerning oversensitivity of my bronchi, and an annual check). He did not know what BHD was; I was expecting this so I had a print out of what BHD is etc. and gave this to him. I also told him that other family members were also BHD positive and were patients of another pulmonologist in the same hospital. I gave him the family names and the name of the pulmonologist, but when my family was visiting their pulmonologist, it was not known. It was not communicated within the team. I think this is very sad.

13. Has BHD had any health insurance implications for you?

No, in the Netherlands all people have health insurance, so that is good. What is not so good is that the advice is to get an annual kidney screening by ultrasound and not by MRI.

Another item is that maybe, when my daughter needs a mortgage to buy a house it can be more difficult –> It can be that she needs to pay a higher interest percentage. I do not exactly know what the consequences are.

14. What are your thoughts for the future?

Although there is no cure or healing yet, it will come out good.

If the annual screening of the kidneys is done, a possible kidney tumour will be detected on time and a kidney-sparing surgical can be performed. And after a pneumothorax a talc treatment can be done to prevent another pneumothorax.

15. What advice would you give to someone who has just been diagnosed with BHD?

It is almost 10 months ago that we (my sister and I) have been diagnosed for BHD, but I still have the feeling that it still needs some more time to settle down and to be given a place. My sister is still recovering, I hope she will get well again, and can go to work again.

So, I am not in the phase of accepting.