Your DNA contains the code to create all the genes necessary that make you (e.g. your eye or hair colour). It also has the information to tell a cell what type of cell to be (e.g. a kidney or brain cell). A gene is a set of instructions to build a protein, and it is proteins that do all the work in a cell. Everyone has two copies of each gene – one from their mother and one from their father. Mutations in genes can occur naturally throughout our lives, and many will be harmless. Some mutations occur due to external factors such as smoking or sun damage, and some, like the mutations that cause BHD, are inherited from our parents.

BHD patients have a mutation in one of their two Folliculin genes, which stops that copy from being able to make a fully working Folliculin protein. This means that people with BHD can only make half the amount of Folliculin protein as someone without BHD. This is sufficient to cause the majority of symptoms seen in BHD syndrome, but is thought that mutations in both copies of the Folliculin gene need to mutate to cause kidney cancer.

Determining the structure of proteins is very complicated, however it can be an extremely useful tool in helping scientists understand the function(s) of proteins. Structural information can be used to develop drugs that can inhibit a certain function of the protein, and can detail how certain proteins may interact with each other and what effects any mutations may have on function. In 2012, researchers from the University of Cambridge discovered that part of the Folliculin protein looks like this: 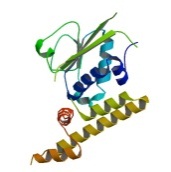 Folliculin appears to play a role in a large number of cellular processes, such as metabolism, cell growth and cell death. The structural insights gained in the study above suggests that folliculin seems to be important in getting cell-adhesion proteins to the surface of the cell. Cell adhesion proteins help cells stick to one another, which allows tissues and organs to form. When Folliculin is missing from certain cells, this seems to stop cells being able to stick to one another normally and seem to stick to each other too tightly, or not tightly enough. Loss of cell-cell adhesion is often seen in cancers, including BHD-associated kidney cancer, highlighting the importance of this kind of research in furthering our understanding of the link between genetics and disease manifestation.