The International Rare Lung Diseases Research Conference (RLDC) and LAM symposium were held last week over four days.  They brought together clinicians, scientists, patients and families to Cincinnati to review research developments in rare lung disease and to promote dialogue between the research community and patients. Next week’s blog will focus on the highlights of the entire conference. This week the blog is focused on the BHD syndrome specific talk and poster.

Dr Robert Kotloff from the Cleveland Clinic presented the “BHD Syndrome” talk as part of the Cystic Lung Disease session. Dr Kotloff described the case of a 22-year-old female presenting with spontaneous pneumothorax (SP) after a plane flight. SP was managed with a chest tube. One month after discharge, the patient was readmitted with recurrent pneumothorax and underwent video-assisted thoracoscopic surgery (VATS) and pleurodesis. A lung biopsy showed emphysematous blebs and eosinophilic pleuritis. In addition, the patient reported chronic cough but tests showed normal pulmonary function. The patient was referred to LAM/CLD clinic for second opinion and a CT scan revealed lungs cysts. Dr Kotloff mentioned the importance of family history for diagnosis: “In the era of precision medicine, taking a history still matters” – the patient’s mother had chronic cough and a cousin had a history of spontaneous pneumothorax and nephrectomy for renal cancer. Dr Kotloff had his Dr. House moment: “It’s BHD Syndrome. Get renal MRI and call a derm consult stat.”

Dr Kotloff presented BHD as an autosomal dominant disorder characterized by predisposition to fibrofolliculomas, lung cysts, SP and renal neoplasm and talked about the its original description in 1977, the recognition of non-cutaneous manifestations in 1999 and the clear association of BHD with pulmonary disorders in 2007. A quantitative analysis comparing BHD pulmonary cysts to LAM cysts was presented showing that LAM patients present a much higher number of cysts than BHD patients (~150 vs 28) but these cysts are significantly smaller (~18 vs 33 mm2) and more circular. The distribution of the cysts was also shown to be different with BHD cysts more prevalent in lower lung zones. In addition, unlike LAM, BHD pulmonary lung function is relatively normal. Dr Kotloff then mentioned that lung biopsies are not helpful in BHD patients since they are non-specific and that for the cutaneous manifestations a careful examination by a dermatologist is essential. The speaker also discussed what is known already about the characteristics of BHD renal manifestations, the molecular genetics of BHD and the FLCN-mediated pathways. The last part of the talk focused on BHD diagnostic criteria and management.  Regarding BHD management, the recommendations are: genetic counselling/screening of family members, considering pleurodesis after the first pneumothorax, renal imaging every 2 years starting at age 21 – as CT scanning is impractical for lifetime screening, MRI is preferred. For the management of renal neoplasms, intervention is indicated when tumours reach 3 cm in size, ideally via nephron-sparing partial nephrectomy, with cryoablation and radiofrequency ablation as alternatives for poor surgical candidates. At the moment, and unlike in LAM, no proven therapeutic role for mTOR inhibitors is established. 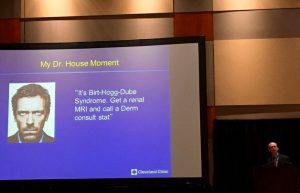 Dr Nishant Gupta presented the poster titled “Management of spontaneous pneumothorax and safety of air travel in patients with BHD syndrome”. The study consisted of a survey sent to BHD patients with questions addressing patient demographics, clinical manifestations of BHD, management of pneumothoraces and episodes of SP during or within 24h after a flight. This study showed that over 75% of BHD patients who completed the survey (ie a self-selecting sample) will experience at least one SP in their lifetime with an 80% chance of recurrence, however, pleurodesis reduced the chance of recurrence in half. The risk of flight-related SP in BHD patients is 8% per patient and less than 1% per flight. Patients experience a considerable amount of anxiety related to the risk of SP during air travel, partially due to the lack of information provided by caregivers. Over half the patients were given no recommendations regarding the safety of future air travel following SP. These results are similar to those presented by Johannesma et al. (2016) that evaluated the incidence of SP in patients with BHD occurring within 1 month after air travel.  The Johannesma study was discussed in a previous blog and the authors concluded that air travel may increase the risk of developing pneumothorax with 9% of BHD patients developing a SP < 1 month after air traveling with a SP risk of 0.63 % per flight. In both studies, to determine whether the pneumothoraces occurred during or shortly after air travel, imaging before and right after would be required. It is essential that patients are properly advised that the presence of any symptoms during or shortly after air travel might indicate a pneumothorax. Further research is required to draw more conclusive associations.

The conference was a wonderful opportunity to meet clinicians, researchers and patients, and to hear about projects helping rare disease research. It is important that BHD syndrome is represented at relevant conferences with talks, posters and the presence of the BHD Foundation to increase awareness in the medical community about the disease.